DIAMONDS kicks off officially in Brussels

The DIAMONDS consortium met in central Brussels for the inaugural project meeting laying out their plans to deliver this EU-funded project over the next five years.

On Monday 20th January 2020, the launch of DIAMONDS was officially announced in press releases across Europe. This was quickly followed two days later with all 28 partners of the consortium gathering in central Brussels for the Kick-Off meeting at the majestic Sofitel Hotel.

The consortium had a lot to get through with a very busy agenda for the two-day meeting. The meeting officially opened with lead investigator of DIAMONDS, Professor Mike Levin of Imperial College London (UK) presenting an overview. Prof Levin was enthusiastic in his delivery, speaking of the crucial milestones and precursor projects (ILULU, EUCLIDS and PERFORM) that have led the consortium to working on this five-year project. For some of the consortium partners, DIAMONDS is the culmination of working together for over a decade.

This was followed by a presentation delivered by the EU Project Officer (PO) on duties and responsibilities of partners. Like all Horizon 2020 projects, the PO oversees the project and is the main contact for the DIAMONDS consortium in liaising with the EC. Following the PO, each work package lead presented on their aims, goals and action plans in delivering their work components. Considerable focus was placed on the design of the clinical studies which have a direct and crucial impact in the results from all other WPs.

Prior to the meeting the Coordinator invited all participants, including their families and friends to participate in a ‘logo competition’. Submitted entries were presented on the first day of the meeting, and the consortium voted on the logo they wanted to represent DIAMONDS. The logo has been finalised and will be used across all DIAMONDS communications and dissemination activities.

Overall, the first project meeting for DIAMONDS was a huge success and the next meeting is scheduled for November 2020 and hosted by partner institution, SERGAS (Santiago, Spain). 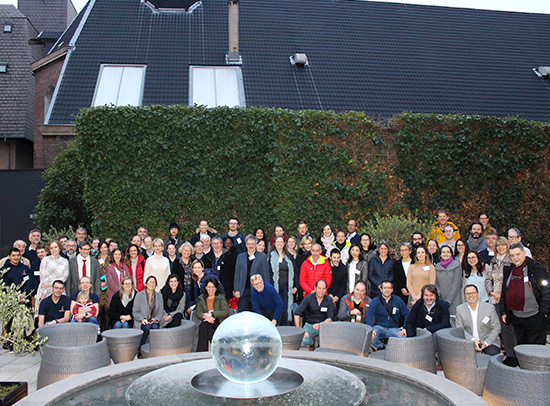 This project has received funding from the European Union’s Horizon 2020 research and innovation programme under grant agreement No. 848196